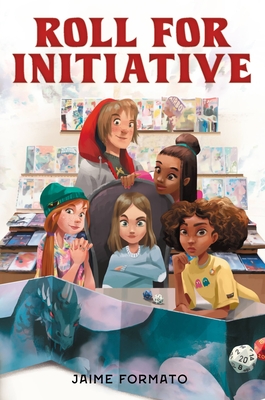 Perfect for fans of Dungeons & Dragons, Raina Telgemeier, and Jessica Kim, a heartfelt coming-of-age middle grade novel about finding your voice and believing in your best geeky self.

Riley Henderson has never taken a bus to school in her entire life. Or made an afterschool snack, or finished her homework on her own, or—ewww—done her own laundry. That’s what her older brother Devin was for.

But now Devin’s gone. He’s off in California attending a fancy college gaming program while Riley is stuck alone in Florida with her mom. That is, until a cool nerd named Lucy gives Riley no choice but to get over her shyness and fear of rejection and become friends. The best part is . . . both girls are into Dungeons & Dragons. In fact, playing D&D was something Riley and Devin used to do together, with Devin as the dungeon master, guiding Riley through his intricately planned campaigns. So, of course, Riley is more than a little nervous when Lucy suggests that she run a campaign for them. For the chance at a friend, though, she’s willing to give it a shot. Soon, their party grows and with the help of her new D&D friends, Riley discovers that not only can she function without Devin, she kind of likes it. She figures out that bus thing, totes the clothes down to the laundry room and sets up her D&D campaigns right there on the slightly suspect folding table, makes her own snacks and dinner— the whole deal. But when Devin runs into trouble with his program and returns home, it's pretty clear, even to Riley, that since he can’t navigate his own life, he’s going to live Riley’s for her. Now she has to help Devin go back to college and prove to her mom that she can take care of herself . . . all before the upcoming Winter-Con.

It's time to Roll for Initiative.
Jaime Formato is a third-grade teacher from northern Florida. Her days are spent hanging out with kids and reading, and the nights are for musicals, hockey, and writing. She lives in a little house by the woods with her husband, their four beautiful children, two cats that don’t love her enough, two dogs that love her a little too much, and a whole lotta nature.
A middle schooler starts up a Dungeons & Dragons party.
Sixth grader Riley’s best (and only) friend is her older brother, Devin, who’s left Florida for California and college; now she’s facing middle school alone. Having to learn independence without Devin’s guidance and hand-holding, she decides to write a Dungeons & Dragons campaign for him so when he comes home for the holidays, she can take a turn as their Dungeon Master. But Riley draws the attention of Lucy, a neighbor Riley thought was too cool for her, who wants to play D&D. Soon they’re joined by Hannah, a high-energy neighbor from their apartment building, and Jen, an artistic, high-achiever classmate. Riley’s emotional, sensitive nature—which causes her social anxiety—enables her to perceive the insecurities of those closest to her and support them. Her growing confidence is challenged by her brother’s purist take on D&D, however, especially when his own emotional fragility brings him home early, expecting to take on his old caretaker role and cramping her newly autonomous style and social life. The D&D elements give enough detail to guide a new player and capture the tabletop game vibe without overwhelming the narrative. The interpersonal conflicts are all based in affection and care, and the ending rewards Riley’s growth. Riley, her family, and Hannah are White; Jen is Black, and Lucy has a Black father and White mother. Spot art enhances the text.
Maxes out its stats in empathy, creativity, and character growth. (Fiction. 8-14)
—Kirkus

"A fun-filled winner, Roll for Initiative will appeal to gamers and non-gamers alike. Readers will root for Riley as she navigates through friendships and family while keeping her first D&D campaign on track. A fantastic reminder that everyone can use a confidence boost, even those who seemingly have it all together."—Kim Long, author of Lexi Magill and the Teleportation Tournament

"Formato's middle grade debut is a dazzling story about growing up and finding yourself along the way. This is the book that every D&D playing, comic book reading, gamer girl needs; I would adventure with Riley and her friends any day."—Nicole Melleby, award-winning author of How to Become a Planet

"Roll for Initiative will fan your creative spark and make you feel like you can do anything. I wish I were lucky enough to play a game at Riley’s table."

—Amy Ratcliffe, author of Star Wars: Elee and Me and A Kid’s Guide to Fandom

"An adorably awkward coming-of-age story that blends the fantasy of Dungeons & Dragons with a story of friendship and self-discovery. Roll for Initiative is a charming and heartfelt book about seizing opportunities and growing up with a sense of adventure."—Kat Kruger, Dungeon Master of d20dames podcast and author of How to Be More D&D