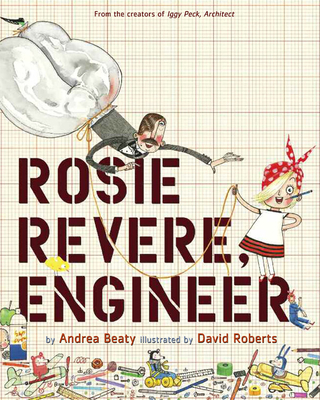 On Our Shelves Now

The beloved New York Times bestselling picture book about pursuing one’s passion with persistence and learning to celebrate each failure on the road to achieving one’s dreams.

Afraid of failure, she hides them away under her bed. Until a fateful visit from her great-great-aunt Rose (AKA Rosie the Riveter!), who shows her that the first flop isn’t something to fear—it’s something to celebrate. And you can only truly fail, if you quit.

Collect them all! Add these other STEM favorites from #1 New York Times bestselling team Andrea Beaty and David Roberts to your family library today!

"The detritus of Rosie’s collections is fascinating, from broken dolls and stuffed animals to nails, tools, pencils, old lamps and possibly an erector set. And cheddar-cheese spray."
—Kirkus Reviews

"This celebration of creativity and perseverance is told through rhyming text, which gives momentum and steady pacing to a story, consistent with the celebration of its heroine, Rosie. She’s an imaginative thinker who hides her light under a bushel (well, really, the bed) after being laughed at for one of her inventions."
—Booklist

Andrea Beaty is the author of many beloved children’s books, including the bestselling Questioners series, Attack of the Fluffy Bunnies, Happy Birthday, Madame Chapeau, and One Girl. She lives just outside Chicago. David Roberts has illustrated many children’s books including the bestselling Questioneers series. He lives in London.