Carol Lynne Knight with IF I GO MISSING 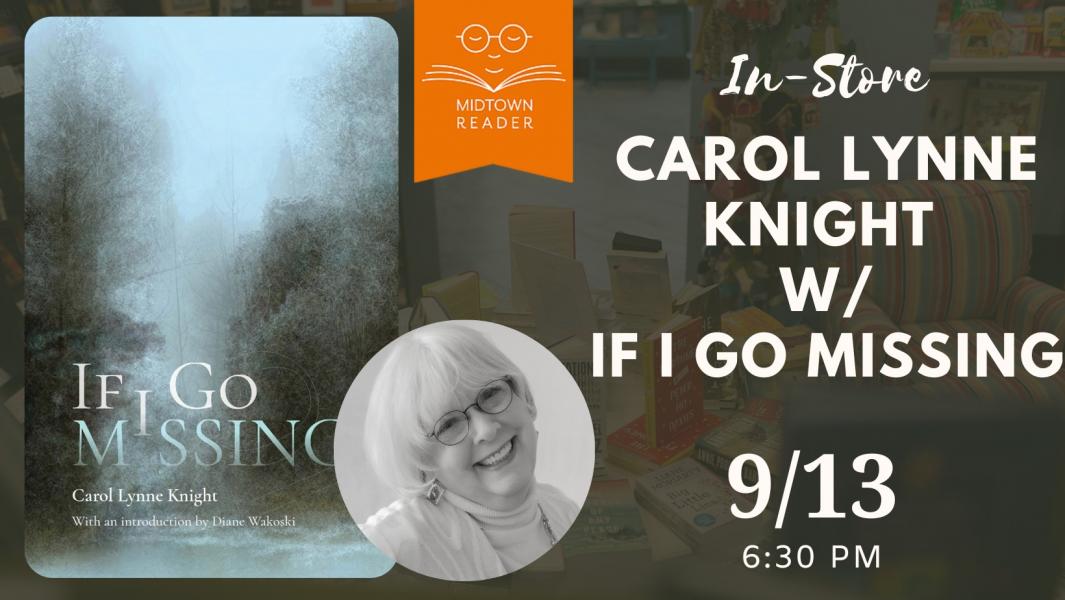 About the book:
What happens when the ex-wife of an ex-cop, with a penchant for TV detectives, speculates about her own disappearance?

In this thoughtful journey, fictional detectives examine her house, her belongings, her lovers, and her longings. Who has disappeared in this finely drawn and sometimes humorous sequence of poems? Poem by poem, Carol Lynne Knight mixes imaginary investigations with the intimate, often stark, reality of life as the wife of a street cop in South Florida.

Knight presents a mix of sensual experience, dreaming. and procedural detail in this surprising, and original trope. What follows is a mélange of the essentials of a fictional detective’s personality as he or she explores aspects of Knight’s world. Characters from “NYPD Blue,” “CSI Miami,” and “Homicide: Life on the Street,” among others search for her, detail by detail, and reveal an observant, funny, and spiritual poet.

A romp of the original detective, Sherlock Holmes, ends in London with the escape of the kidnapper. In “Abandoned Car Park,” she counts down her last minutes kneeling in a suicide vest in a French car park. An assessment of Vera Stanhope’s frumpy attire results in a shopping spree and a lost earring. At the conclusion of an interview of a fictional ex-husband by British detectives, Scott and Bailey, she hurls his old Playboy magazines into the front yard and paints her bathroom red.

That Knight was the wife of a street cop informs even the imaginary with an authentic truth. There is an intelligence, a longing, and desire evident in every poem. Each of the book’s five sections is introduced by a prose poem, followed by an edgy, short poem that establishes a mood for what follows.

About the author:
Carol Lynne Knight is the co-director of Anhinga Press, where she supervises production, and designs covers and text, and edits books. She is the author of three books of poetry, If I Go Missing (Fernwood Press, 2022), A Fretted Terrain, Like Mars (Apalachee Press, 2020) and Quantum Entanglement (Apalachee Press, 2010). She is the co-editor of Snakebird: Thirty Years of Anhinga Poets.

Born in Michigan, she grew up in South Florida and graduated from the University of Miami and Florida State University with degrees in Art Education. She has exhibited her drawings, pottery, sculpture and computer images in the eastern U.S. In other lives, she has worked as an art teacher, potter, videographer, and graphic designer. She lives in Tallahassee, Florida.

If I Go Missing (Paperback)