An historical thriller set in 1776 Philadelphia.
As the colonies begin to talk openly of political separation from England, a coded letter is deciphered. It suggests that an assassin, code name Incognito, is headed to Philadelphia to assassinate key leaders of the Continental Congress. The assassin may have co-conspirators in the city, and in the Congress itself.
Will Harrell, the young man who decoded the letter, is tasked with investigating the matter, uncovering the identity of the assassin and his confederates, and foiling the plot. While he works feverishly against the clock, he must deal with some skeptical and uncooperative delegates, an abundance of suspects but a scarcity of hard evidence, his own self-doubt, and a widening plot that includes a planned assassination of General George Washington in New York.
Will is determined to thwart the assassin, but his adversary is creative and resourceful, a master of disguise, handsome, charming, and thoroughly ruthless. The price Will must pay to stop him may prove too dear.

“…a compelling story of intrigue, politics, and the fragility of our nascent rebellion against the British Crown...”--SR Staley, award-winning author of The Pirate of Panther Bay series and St. Nic, Inc.

“…a brilliant, historical, suspenseful page-turner…the work of a seasoned novelist at the height of his powers.”—Michael Lister, New York Times bestselling author of the John Jordan Mystery Series

“The novel works well on so many levels. From the wealth of accurate history woven into the plot, one learns a lot (or renews one’s knowledge) about our country. The story also is authentic in its setting and sense of place, so it isn’t just the factual history on display, but the essence of what life was like back then. And the plot itself—part mystery, part action, part spy thriller, and with a hint of romance to boot—is fast paced and easy to read. It is hard to put down.”---Southern Literary Review

Terry Lewis is a retired judge from Tallahassee, Fl, having served on the bench for 30 years. He is now in private practice focusing on arbitrations and mediations. His first novel, Conflict of Interest, was published in 1997. He followed that with Privileged Information in 2003, and Delusional in 2013, all legal thrillers. His most recent, Incognito, published in 2021, is an historical thriller. He is a past board member of Mystery Writers of America, Florida Chapter and of the advisory board for the Florida Book Awards. 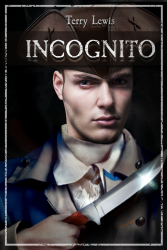